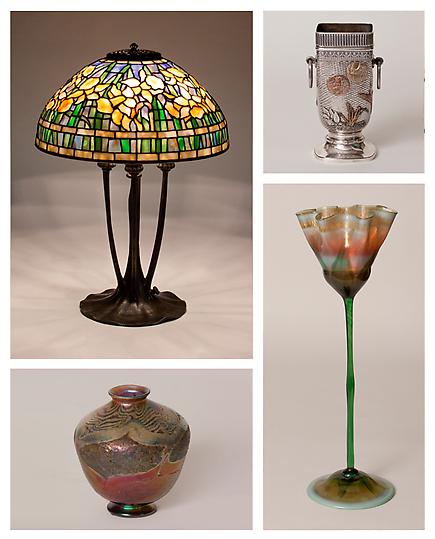 We are pleased to announce our participation in the 2013 Philadelphia Antiques Show. The show will run from Saturday, April 13th through Monday, April 15th, and will be held in Hall F of the Pennsylvania Convention Center, located at 12th & Arch Streets in Philadelphia.

On display in our booth will be a fresh selection of Tiffany Studios lamps, 19th and 20th century American and European decorative arts, as well as Mid-Century Modern furniture and design.

Please note that the schedule for this year’s show has changed to three days instead of the usual four.

Please contact us with requests for passes by email at info@lilliannassau.com or by phone at (212) 759-6062.

We look forward to seeing you at our booth, #2.

Founded in 1962, The Philadelphia Antiques Show is one of the longest running antiques shows in the country. It premiered under the direction of its founder, Ali Brown, as the "University Hospital Antiques Show at the 33rd Street Armory in West Philadelphia."

The Show is now recognized as the finest and most prestigious Show in the United States, offering diverse furnishings and decorative arts for both the period and modern American home.

Since the beginning, the Show's committee (now comprised of more than 200 dedicated volunteers) has worked tirelessly to organize, develop and produce one of the best - and largest - American antiques shows in the world.
Site Index
Lillian Nassau LLC is committed to making its website accessible to all people, including individuals with disabilities. We are in the process of ensuring that our website www.lilliannassau.com is compliant with best practices and standards as defined by Section 508 of the U.S. Rehabilitation Act and Level AA of the World Wide Web Consortium(W3C)Web Content Accessibility Guidelines 2.0. These guidelines explain how to make web content more accessible for people with disabilities. Conformance with these guidelines will help make the web more user-friendly for all people. Copyright © Lillian Nassau LLC All Rights Reserved