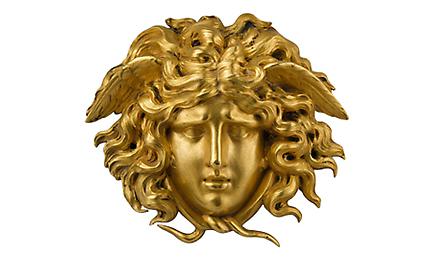 Lillian Nassau LLC is pleased to lend several pieces from our collection of French Art Nouveau ceramics to “Salvaging the Past: Georges Hoentschel and French Decorative Arts from the Metropolitan Museum of Art,” opening April 4 at the Bard Graduate Center in Manhattan.

For more information on the show, please click here to visit the website of the Bard Graduate center.

From April 4 to August 11, 2013, the Bard Graduate Center: Decorative Arts, Design History, Material Culture (BGC) presents Salvaging the Past: Georges Hoentschel and French Decorative Arts from The Metropolitan Museum of Art. Focusing on a remarkable but little-known collection that entered the Metropolitan Museum as a gift of J. Pierpont Morgan in the early twentieth century the exhibition features more than 200 objects of primarily medieval art and French eighteenth-century paneling, furniture, metalwork, textiles, paintings, and sculpture, as well as late nineteenth-century art pottery, most of which have rarely been viewed since the 1950s. The fourth in a series of collaborations between The Metropolitan Museum of Art and the BGC, the exhibition provides the first comprehensive examination of Georges Hoentschel—a significant figure in the history of collecting—and illuminates an understudied and critical chapter of the Metropolitan’s history.

Drawn primarily from the Metropolitan Museum’s holdings, with loans from other public and private collections in the United States and France, the exhibition tells the story of this unique collection in four sections. The first introduces Georges Hoentschel, who was an enterprising and successful decorator during the late nineteenth and early twentieth centuries, when France witnessed a great scientific, industrial, and social transformation and the newly moneyed bourgeoisie adopted a lifestyle based on an aristocratic model. As director of the Parisian decorating firm Maison Leys, Hoentschel catered to these affluent clients, creating for them interiors in historic French styles. In this section of the exhibition, ephemera, family papers, photographs, and a film presentation will outline his story within the context of Belle Époque Paris.

The second and largest section presents selections from the eighteenth-century holdings of the collection in installations inspired by historic photographs of Hoentschel’s densely arranged showroom-museum in Paris, where the objects served as models for his interior decorating business. Delicately carved woodwork, decorative paintings, and exquisitely chased gilt-bronze mounts are featured here. Highlights include a chair made for Louise-Élisabeth of Parma, daughter of Louis XV; an armchair made for Louis XVI; and a panel from shutters originally installed in a room outside the chapel at Versailles.

The third section displays medieval artworks, including sculpture, ivories, and metalwork, and includes one of the finest surviving examples of French Limoges enamelwork—a twelfth-century reliquary container, or chasse. Also shown here is Jean Barbet’s Ange du Lude, on loan from the Frick Collection, a rare bronze angel dated 1475, one of the most remarkable works from Hoentschel’s collection.

The final section presents examples of Hoentschel’s stoneware and those of his friend the sculptor and potter Jean-Joseph Carriès (1855–1894). Some of these ceramics were originally exhibited in the Union Centrale des Arts Décoratifs’ pavilion at the 1900 Exposition Universelle in Paris, for which Hoentschel created interiors in art nouveau style, unique in his oeuvre. A chair from this pavilion, loaned by the Musée des Arts décoratifs, Paris, is displayed, along with a selection of furnishing textiles used by Hoentschel in interior design commissions.
Site Index
Lillian Nassau LLC is committed to making its website accessible to all people, including individuals with disabilities. We are in the process of ensuring that our website www.lilliannassau.com is compliant with best practices and standards as defined by Section 508 of the U.S. Rehabilitation Act and Level AA of the World Wide Web Consortium(W3C)Web Content Accessibility Guidelines 2.0. These guidelines explain how to make web content more accessible for people with disabilities. Conformance with these guidelines will help make the web more user-friendly for all people. Copyright © Lillian Nassau LLC All Rights Reserved